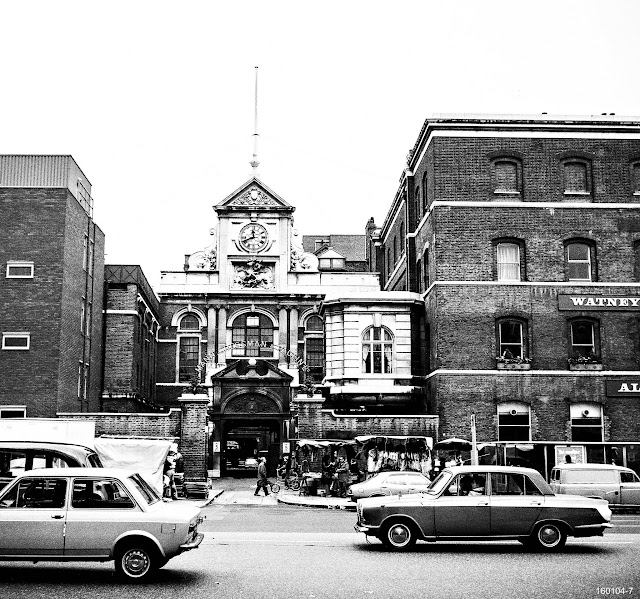 Youth is a time for falling in love. Whilst middle age can be devoted to fame and fortune and old age to remembering where you left your false teeth: youth is the time to open your heart to passion. As a young man I fell in love with breweries. I realise that this may make me sound a little odd, but there is something about breweries - the sensuous curves of the mash tubs, the promise of pleasures to come, the light headed response to those special aromas. Whist my peers were lusting over whatever pop princess or film starlet was in fashion at the time, I was out taking photographs of breweries. 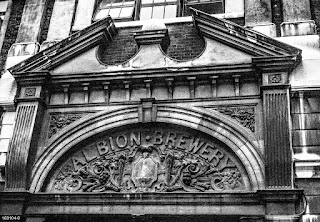 I was reminded of this youthful eccentricity only yesterday as I scanned some old negatives I shot in the 1970s which feature the old Albion Brewery on the Whitechapel Road in London. It was - and to a much lesser extent, still is - a magnificent building which displays much of the grandiosity of nineteenth century brewery architecture. This was a time when both brewers and breweries were getting bigger and anxious to display their commercial superiority (in sharp contrast, it must be said to today when brewing is returning to its small-scale roots). Some of the old Albion Brewery still exists - the fancy bits have been converted into desirable residences whilst the boring bits have been converted into a Sainsbury's Supermarket. 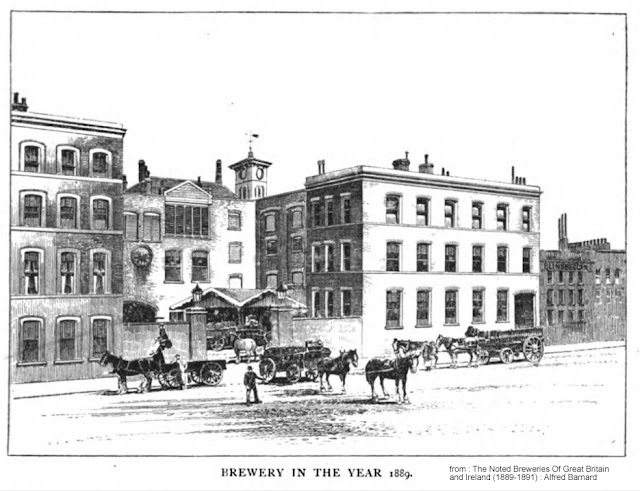 To get a feel of the old brewery at the hight of its fame, when it was the commercial home of Mssrs Mann, Crossman and Paulin, you need to turn to that bible of brewerama - Alfred Barnard's "The Noted Breweries Of Great Britain and Ireland (1889-91)". Barnard devotes three chapters to the Albion Brewery - here is just a short extract:

"Breweries have certain peculiarities in their external appearance, whereby they are easily distinguishable from any other industries. They are mostly lofty buildings with tall chimney shafts and large windows, and from the ventilating louvres of the edifice there is generally issuing forth a cloud of steam from the boiling wort and hops, which fills the air with a most healthful and appetising odour. This establishment was no exception to the rule, and its buildings form a conspicuous object in the locality. It is situated in the Mile End Road, close to the old turn-pike gate, and covers nearly five acres of ground. In olden times the brewery was almost hidden from the public road, for where is now the noble entrance and spacious courtyard in front of the brewery, formerly stood a row of alms-houses, next to which was the counting house, brewery-tap and the "Blind Beggar" public house, the latter still in existence"

Barnard was well into his fifties when he wrote this, but still you can detect that youthful passion that we both obviously shared. Whilst it will be a long time before I will ever bring myself to mourn the standardised and anodyne output of those grand nineteenth century breweries, the buildings had a magnificence without equal in the world of today.
Posted by Alan Burnett at 03:17 No comments: 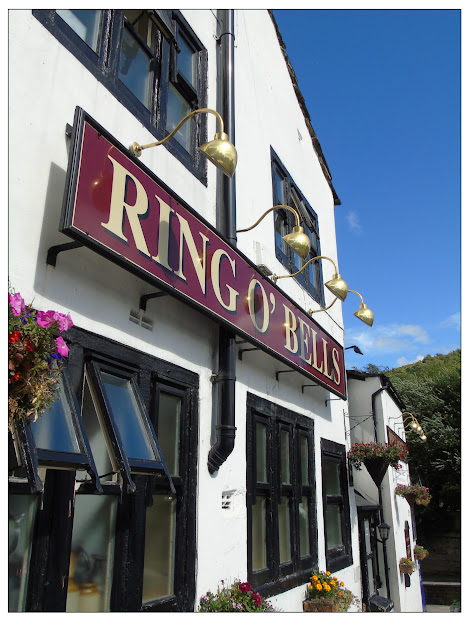 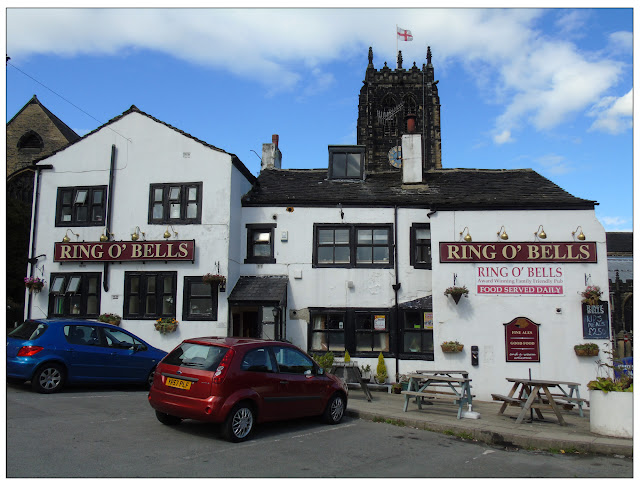 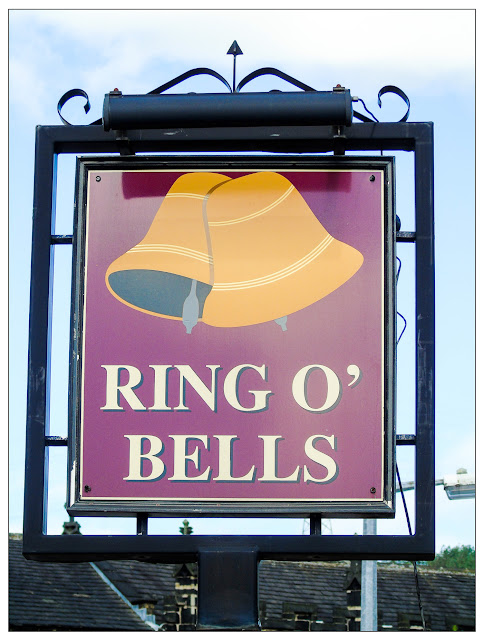 Posted by Alan Burnett at 06:37 No comments: 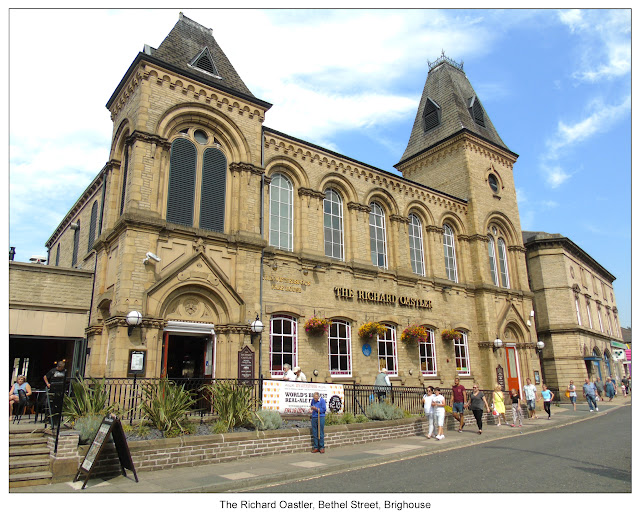 Posted by Alan Burnett at 03:53 No comments:

Picture A Pub : The Shoulder Of Mutton, Northowram 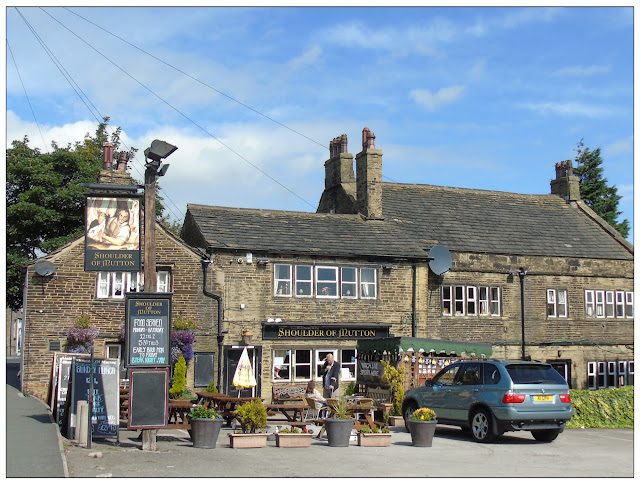 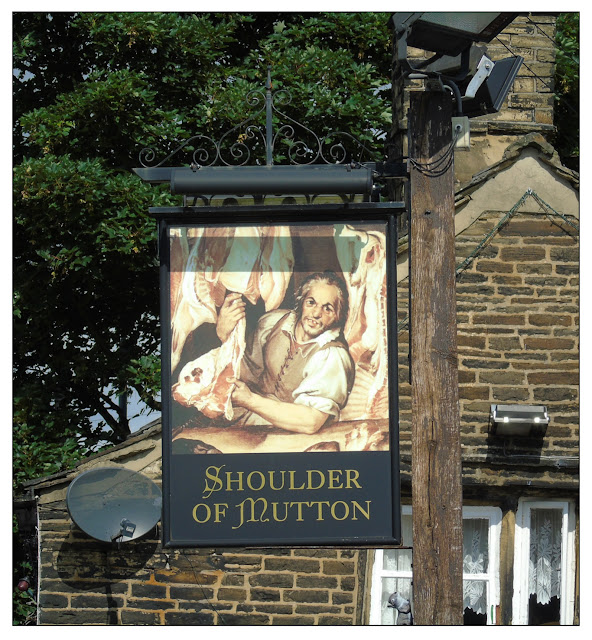 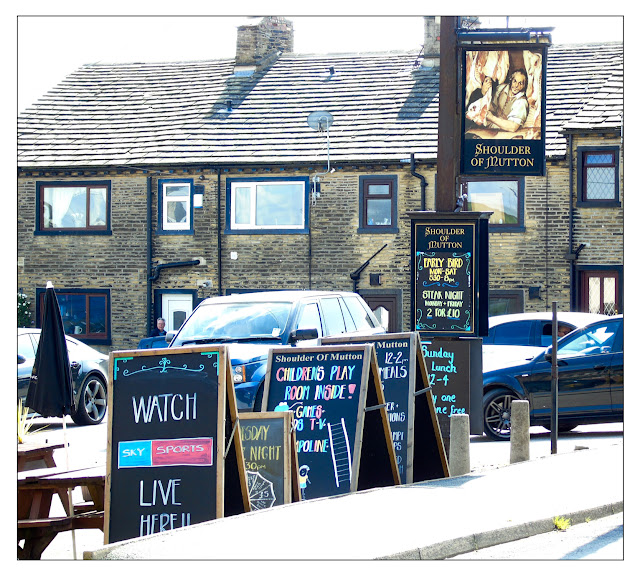 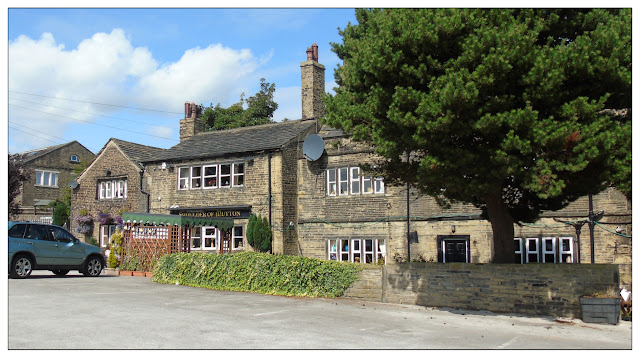 Posted by Alan Burnett at 08:07 No comments:

A Year Of Beer 14 : The Oak Wheel, Burniston 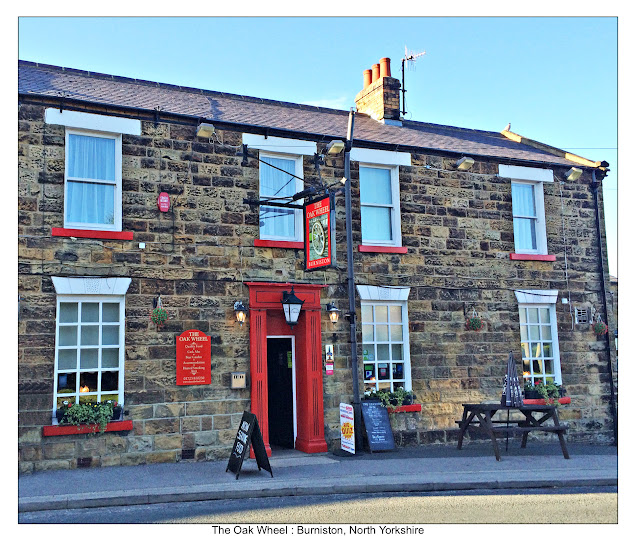 Pleasant village pub in Burniston, which is a few miles north of Scarborough on the Yorkshire coast. At one time there were pubs like this in most villages but they are increasingly becoming a rarity. It survives by doing what such pubs need to do these days - a few rooms, a lot of food, a quiz or two - and doing it rather well. We ate there and the food was excellent. We drank there and the drink was well kept and reasonably varied. I washed my steak down with a pint of Timothy Taylors' Landlord - always a safe pair of hands in foreign parts.
Posted by Alan Burnett at 01:44 No comments: 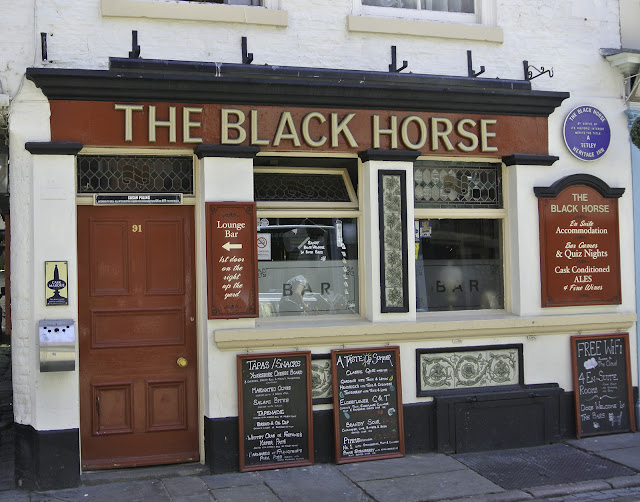 This is the kind of pub an old beer-head like me dreams about when he goes to sleep at night. Dripping with history band real ale, preserved but not picked in aspic, as dark as a Whitby Goth and a shining beacon of what an old English pub can be like. There has probably been a pub here for 800 years or so and there is a good deal of the structure of the current building than can take you back four or five hundred years. There is some fascinating history associated with the place - I particularly love the story of the scan of having two inns with similar names in the same street - but there is little fun in reading such things in the sterility of an on-line context. Go there, get a pint, and soak it all in. I did and the pint in question was a pint of Flipside Brewery's Farthing Mild. Pub, drink, location .... the stuff of dreams.
Posted by Alan Burnett at 04:11 No comments: 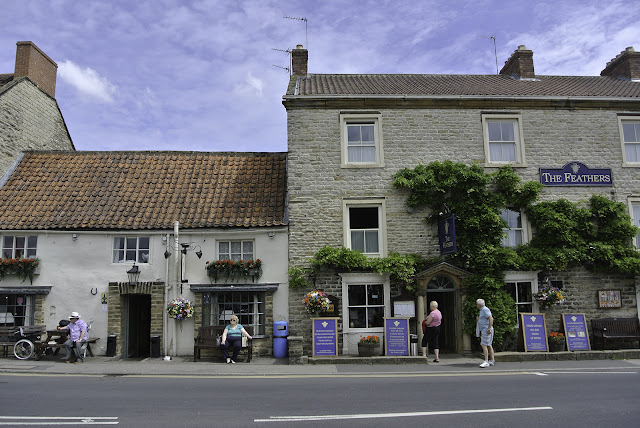 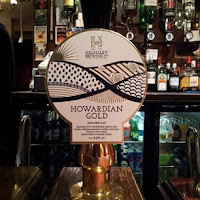 These are two adjacent buildings now united as the Feathers Hotel and the Pickwick Bar. The hotel was originally a private house before becoming a coaching inn whilst its neighbour is an old cottage, supposedly one of the oldest domestic buildings in this small North Yorkshire town. Some of the panelling is said to have come from Helmsley Castle and both the bar and the hotel are full of work by Robert Thompson, the famous Mouseman of Kilburn. An internal door allows you to move from the more formal hotel to the more drink-friendly bar without having to leave the building. I carried through a pint of the locally brewed Howardian Gold, and having drunk it, I'm glad I did.
Posted by Alan Burnett at 03:42 1 comment:

A Year Of Beer 11 : The Blake Hotel, Sheffield 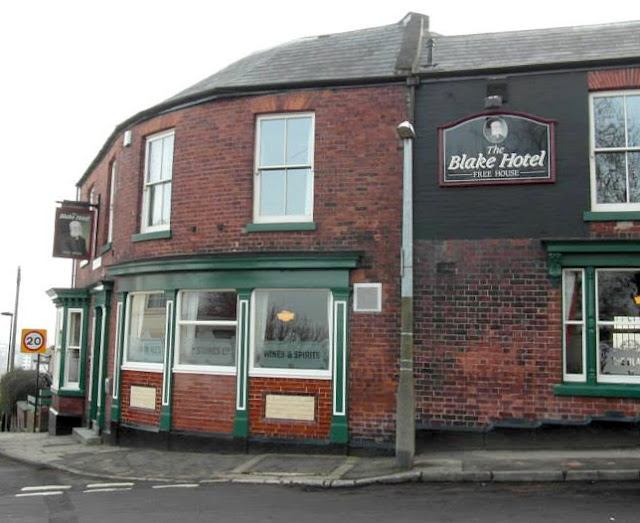 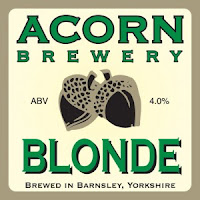 I can just about remember this back street pub from when I lived in Sheffield thirty or so years ago. I can certainly remember Blake Street which rises with almost Everest ambition from the valley bottom. These days the Blake Hotel has been transformed into a remarkably good real ale pub that is a delight to visit. Add to that the fact that it is my son and daughters' favourite local and it means you have good views, good beer and the best of company. To get back to their house afterwards you have to climb up another near-versicle hillside which means that the pub deserves sponsorship by the Cardiovascular Service of the NHS. To tackle the walk home I took on a fair amount of anaesthetic and I am a little confused as to what kind it was! I think it was Acorn Brewery's Blonde, if I am wrong, I apologise to the wronged beer. Whatever it was, it helped me get up the hill home.
Posted by Alan Burnett at 09:54 No comments:

A Year Of Beer 10 : The Plasterers Arms, Winchcombe 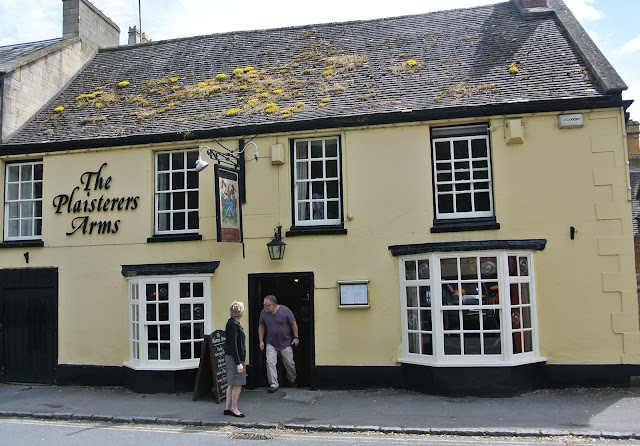 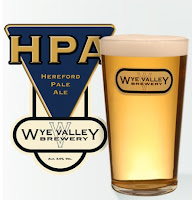 The books say that you cannot miss the Plasterers Arms in Winchcombe as it stands on the busy main road. When we called there, they had dug the main road up and to get to the pub you had to fight your way through belching tarmac spreaders and bobbing JCB diggers. It was worth it, however (in truth, few pubs aren't), as it is a friendly enough place with a range of real ales and non bank-breaking dishes. The "Arms" referred to - and reproduced on the inn sign - are the coat of arms of the Worshipfull Company Of Plaisterers and a plaisterer was nothing more or less than a plasterer (albeit a posh sounding one). The Worshipful Company go back to the sixteenth century and the old inn to the seventeenth. The thoroughly enjoyable pint of HPA (Hereford Pale Ale) probably only went back a few weeks but was none the less refreshing.
Posted by Alan Burnett at 09:35 No comments:

A Year Of Beer 9 : The Old Lodge, Minchinhampton 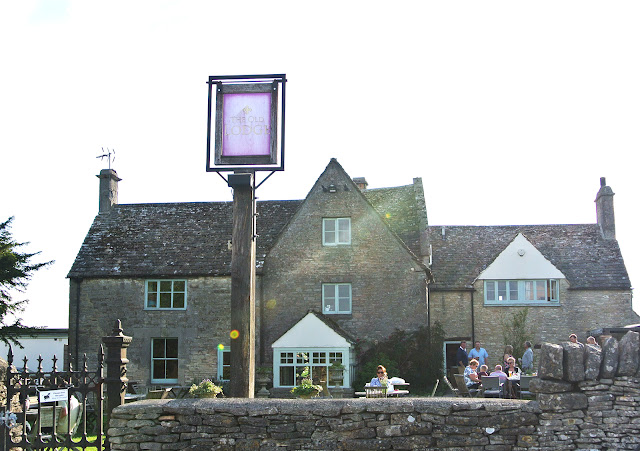 You can have a meal in the dining room of the Old Lodge, which is stuck in the middle of Minchinhampton Common, sat in a large dining room with plate glass windows overlooking the common where cows and horses wander freely. If you are having a steak - which I was - a cow can graze its way right up to your table and pass the time of day with its Auntie Mabel. With that kind of experience you need a decent pint of beer and the Tom Long, which comes from the local Stroud Brewery, is more than decent. And who, I can hear you asking, was Tom Long? Well he may or may not have been a local highwayman who may or may not have been hung from a scaffold at the crossroads on Minchinhampton Common. Who cares?
Posted by Alan Burnett at 09:18 No comments:

A Pint Of Best & Great Yorkshire Pubs is a celebration of pubs, beer and brewing by Huddersfield-based writer and blogger, Alan Burnett. It includes thoughts, notes and ruminations about all things beery along with an endless tour of Yorkshire pubs (and a some from further afield). It attempts to be a celebratory romp rather than a too-serious review and it comprehensiveness will only be achieved once the project is completed in 2099 or when the last Yorkshire pub closes down.

Other Blogs By Alan Burnett